Situated on a high plateau on the south coast of Kaua’i is Kukuiolono Park & Golf Course. Once the home of Walter D. McBryde, it is now a public park and contains a 9 hole, par 36 golf course of extraordinary beauty. The park in entered from Papalina Road above Kalaheo through the gates given by Mr. McBryde in memory of his mother Elizabeth Moley McBryde who died in 1926. It was Mrs. McBryde who, as a widow with six young children, created the huge Wahiawa Ranch which led to the foundation of McBryde Sugar Company and now the Kaua’i Coffee Company.

Walter McBryde, the second son, inherited a generous amount of energy and enterprise. At the time of his death in 1930 he was manager of Kaua’i Pineapple Company, a position he had held since the organization of that company in 1906. He had been a representative to the Territorial Legislature and a member of the Kaua’i Board of Supervisors for 16 years. Among his accomplishments, there was the starting of the comprehensive homesteading scheme and the beautifications of the highways in the Koloa District.

During his lifetime Mr. McBryde created an irrevocable trust of his 346 acres of land, a considerable sum of land to be used as a recreation area for all times for the benefit of the public regardless of race or creed. He also left money in his Will for the upkeep of the park. The community building/pro shop, dedicated in 1972, was built with funds from the McBryde Trust.

Kukuiolono means “the torch of Lono”. Lono was the Hawaiian God of Agriculture and was reputed to have lived on this hill. By an agreement with the fishermen in the district, and the fishermen at sea, a huge torch was kept burning at night. This light could be seen along the whole south coast of Kaua’i from Niihau to Koloa. The fishermen relied on this light to navigate.

In 1907 Walter McBryde built his home at Kukuiolono, located to the right of the present Japanese Garden. Through the years, trees, gardens, walkways, Hawaiian historical stones and a sports field were added to the park. In 1911 on the perimeter of the playing field a 30 ft. wide race track was added. Much later, after World War 11 ended, the park was re-opened. The track was used for horse racing until the golf course was completed in 1956. The race
track is still noticeable on the outer edges of the 1st and 9th holes of the golf course. 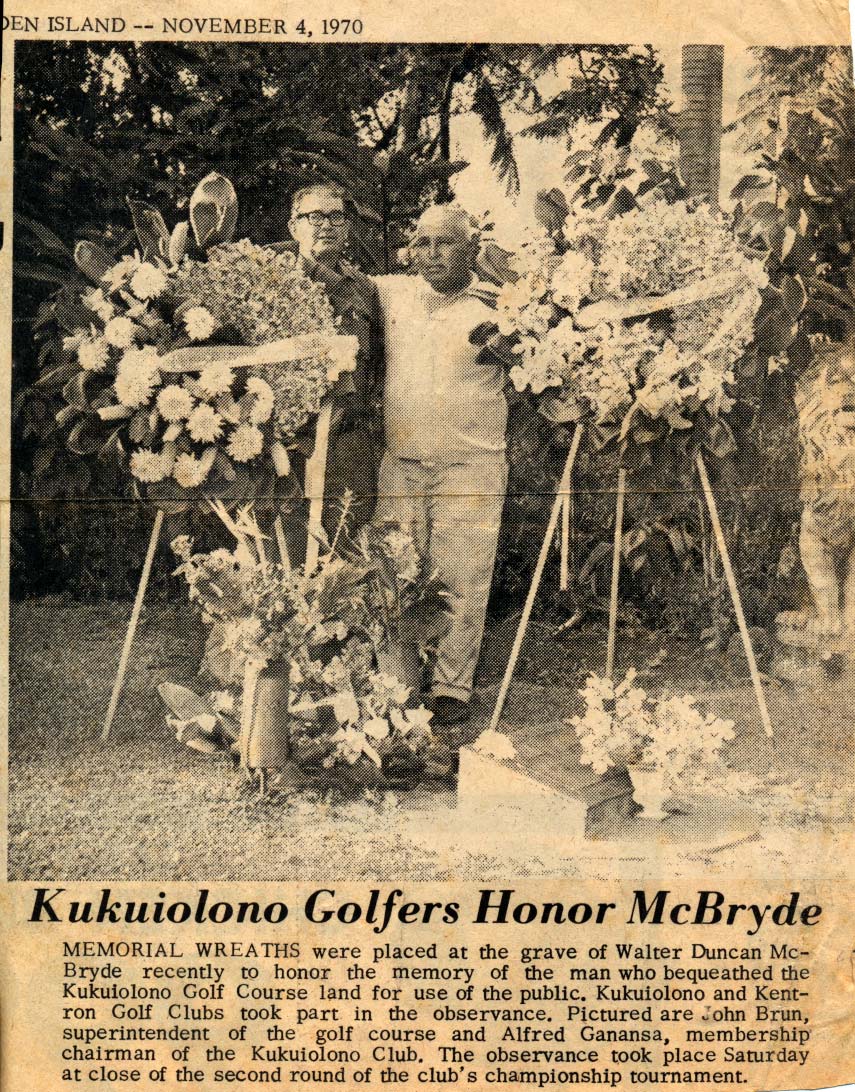 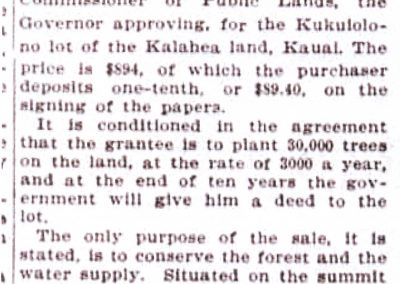 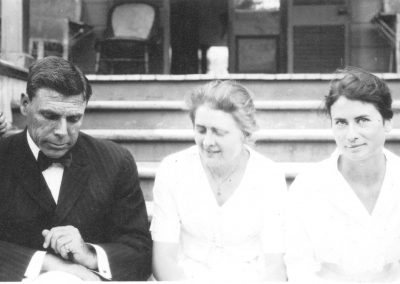 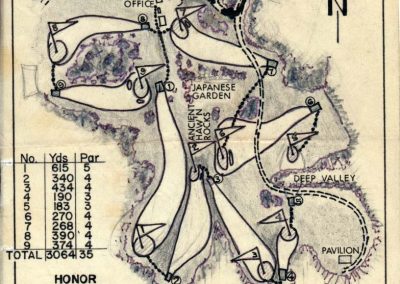 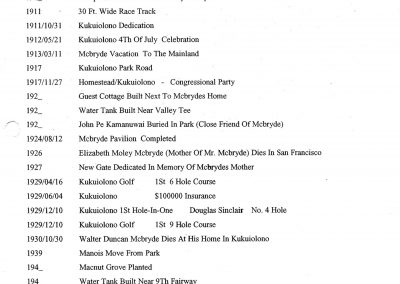 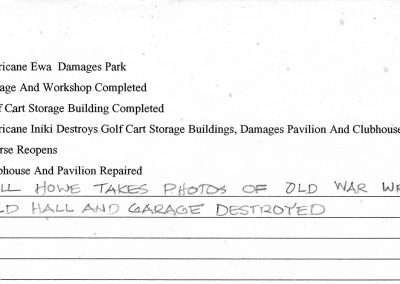 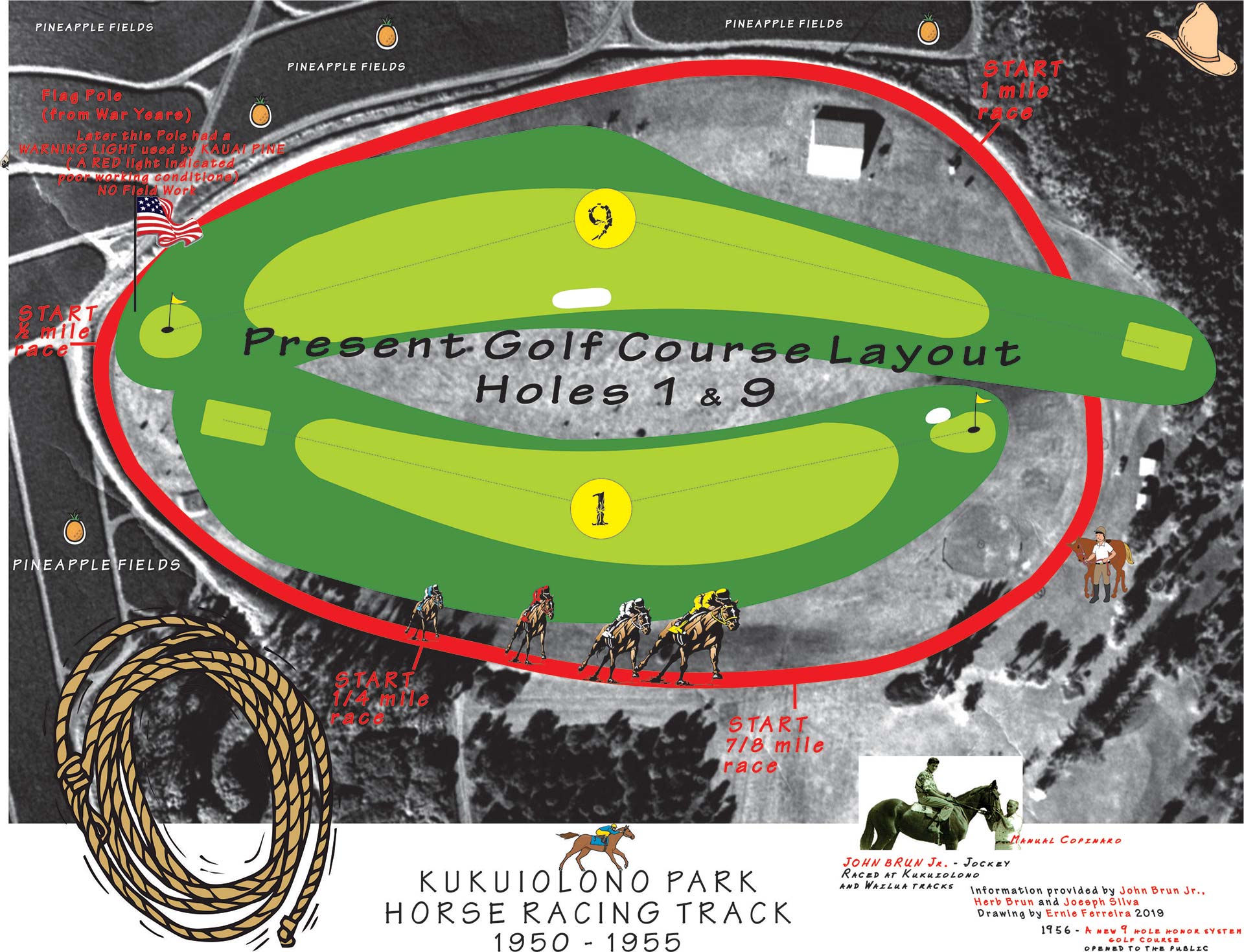 November third will be a big day at the Kukuiolono Park, the new McBryde Park. The occasion will be the celebration of the Mikado’s birthday anniversary and the amusements arranged for the day include horse racing, sulky racing, bicycle and foot racing, as well as various other athletic sports.

The program will open at 9 a. m. and probably continue throughout the entire day for it is not the custom of the Mikado’s subjects to do things on a half-way measure.

The judges for the various contests will be K. W. Kinney, Charlie Aki and F. L. Voller. The management of the track will be in the hands of J. C. Jerves. Invitations have gone out broadcast and an immense crowd is most sure to be there.

KUKUIOLONO PARK IS DEDICATED TO PUBLIC

Flag Pole Exercises Mark the Dedication Of Beautiful Park to The Public By Walter D. McBryde.

A Gift Which Will be long Appreciated by All True Lovers of the Various Kinds of Sport.

The Kukuiolono Park, which was recently dedicated to the public by Walter McBryde, with flag raising ceremonies is a gift which carries more significance than can be realized by a passing thought. It means much as an everlasting stimulous to athletic sports of every discription and is further indication of the thoughtfulness of the donor laboring class, has become a second nature.

The park is situated makai the government road, perhaps a mile, but a splendid approach has been provided over which an auto glides up the glade, with perfect ease. A graded race track 30 ft. wide encircles the park, while the inside is arranged for baseball, football and any other desirable sports. The location of the park may probably lead to a centralization of all sporting events from Makaweli to Koloa, as it is situated at Homestead, a sort of half-way place between the above places.